Design and development of iOS and Android Apps

HomeExchange is the biggest online community of people who travel by exchanging their homes. It has presence in more than 180 countries all over the world.

HomeExchange has an extended and very engaged group of members who've been asking for an App during the past years, so it's development became a priority. It was decided this first version will cover core features like searching for a home and sending/receiving inquiries. Main focus was on making our expert exchangers happy and allow a simple chat-like communication tool so our response rate goes up.

I was in charge of leading a team of 4 people: iOS Developer, Android Developer, UI Designer and QA Analyst. 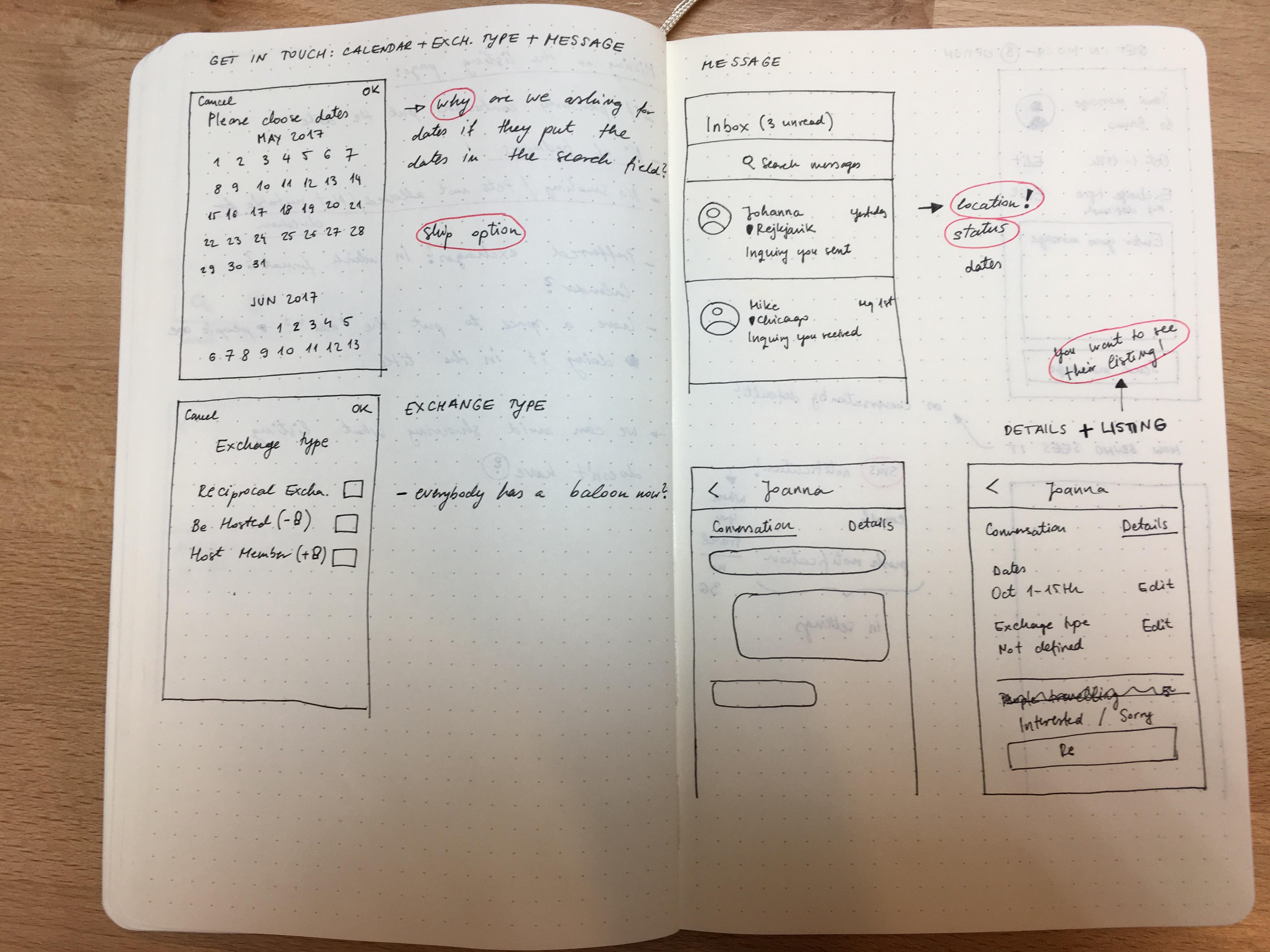 The project started with a kickoff meeting were the bases were set, and we went to creating wireframes and specs in parallel directly from there. We created hand drawn wireframes first. Some screens were directly translated to UI and for some more complex ones, we did high fidelity wireframes including all interactions details.

In order to make the right design decisions we used information we had from some past interviews about users’ habits and requests. To make some specific UX decisions we also used website data reports. 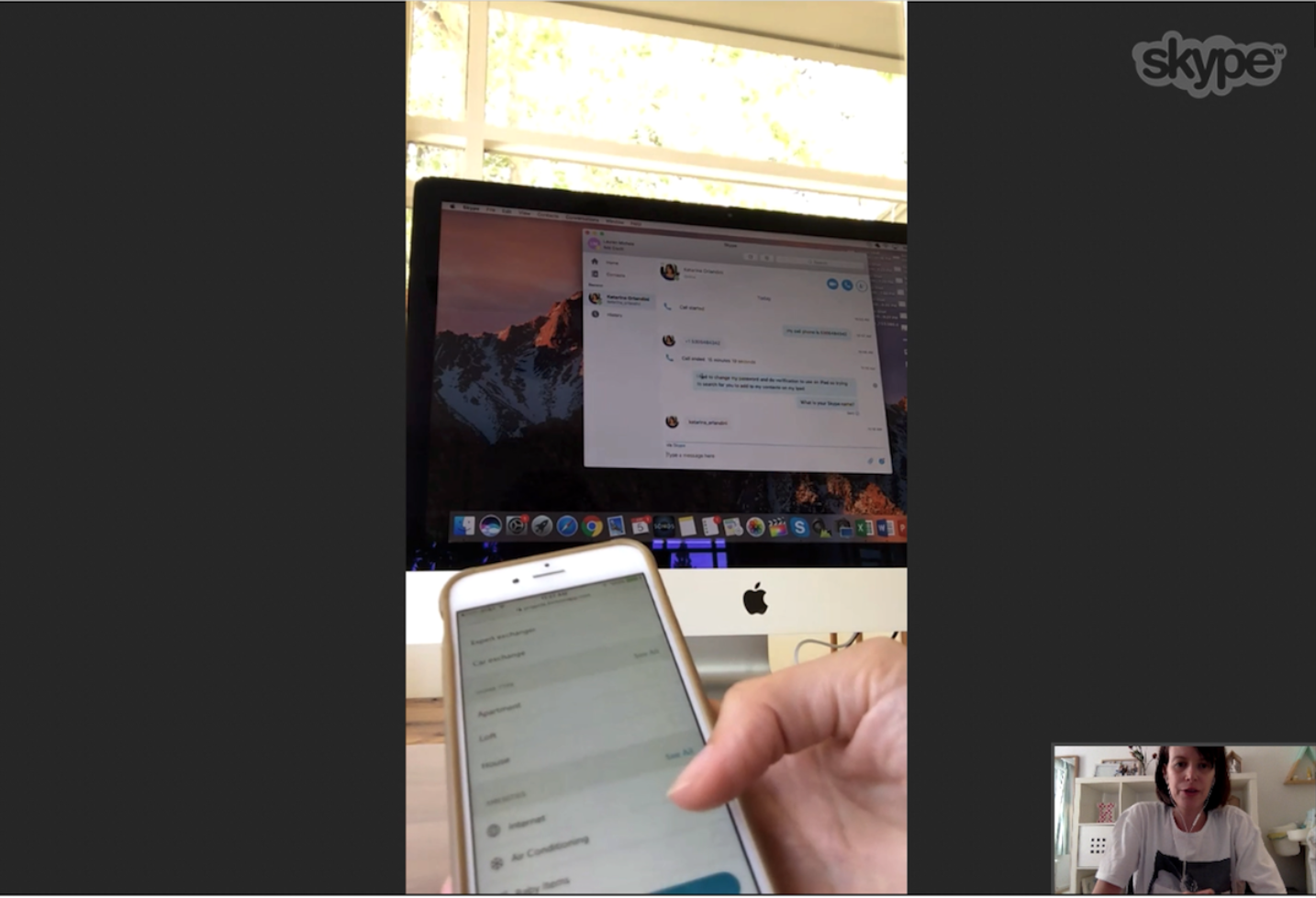 We tested the App in various points during the process. In the very early stage we conducted a user tests with some of our highly active members. We created a prototype on InVision and asked them a series of tasks to fulfil, which concluded in a number of very important insights.

We used our company's yearly meeting to test the first version of the App among team members who are also iPhone users and exchangers. We recruited 9 of them, learned a lot during these sessions, but also reported a lot of bugs.

Soft launch was made to 50 of our Ambassadors and we asked them to fill in a survey. They experienced stability issues, so once this was improved we tested some more and did a public launch. 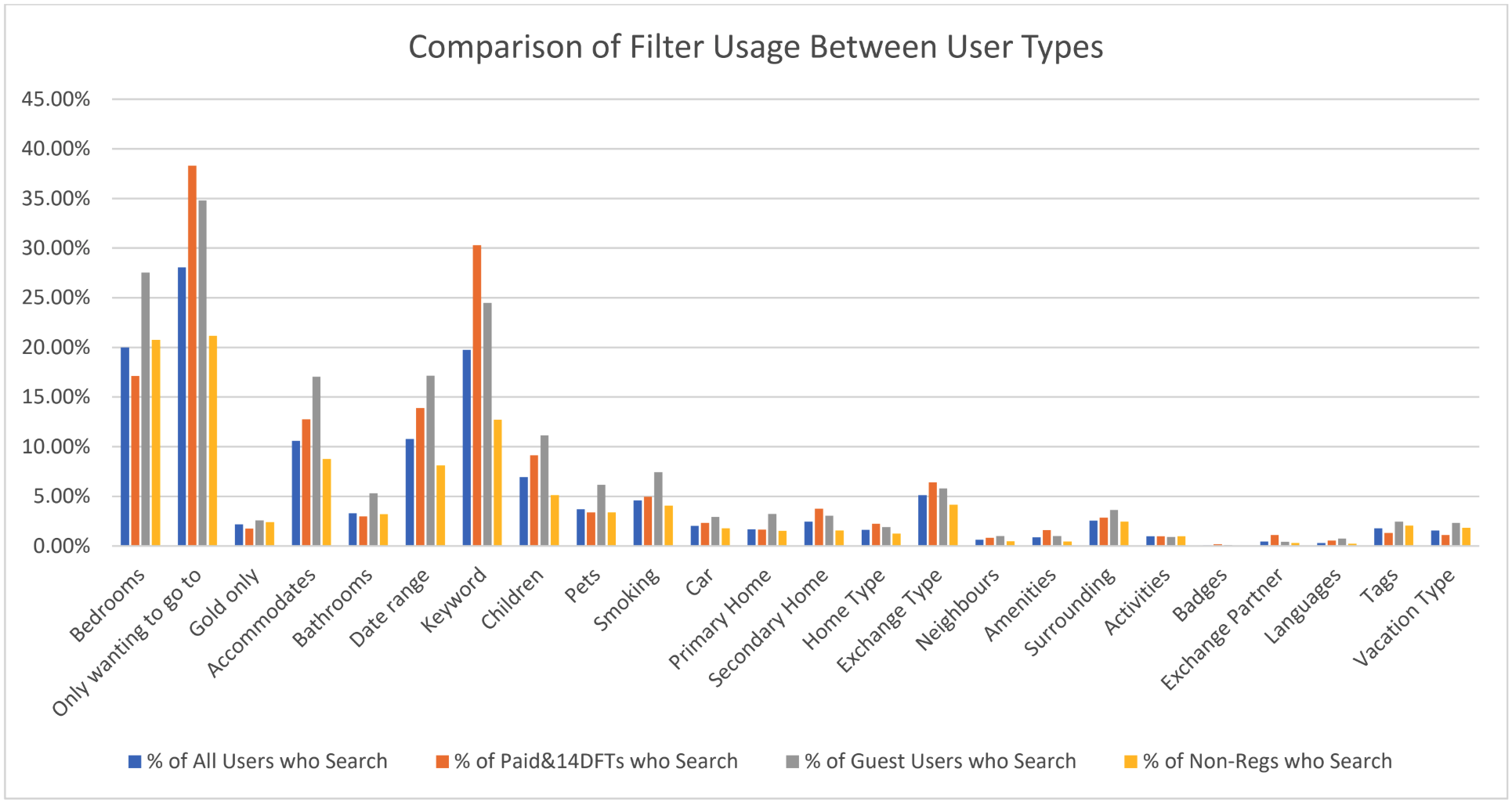 While planning the App features we used the opportunity to clean up some legacy we had on our website and create a fresh start. In many cases we used the available data to support these decisions. In this example we reduced the number of filters on the search page based on the usage they had on desktop. We also added a few based on our interviews insights.

From the very beginning we put a lot of effort in creating detailed technical specifications so that everything was clear to all the members of our remote team.

We didn’t create specific documentation or wireframes for Android, only some adaptations mostly in cases of native behaviours. Although Android App development started later, the process went faster, as we learned many thing during the iOS early stage.

The final result was around 60 pixel perfect screens translated into two beautiful Apps. The iOS App was downloaded 1300 times in the first week and the overall feedback from members was very positive. We also received many feature requests like editing listing and profile that this first version didn't cover.

Note: This version of the App was in use until the merge of GuestToGuest and HomeExchange websites in December 2018. 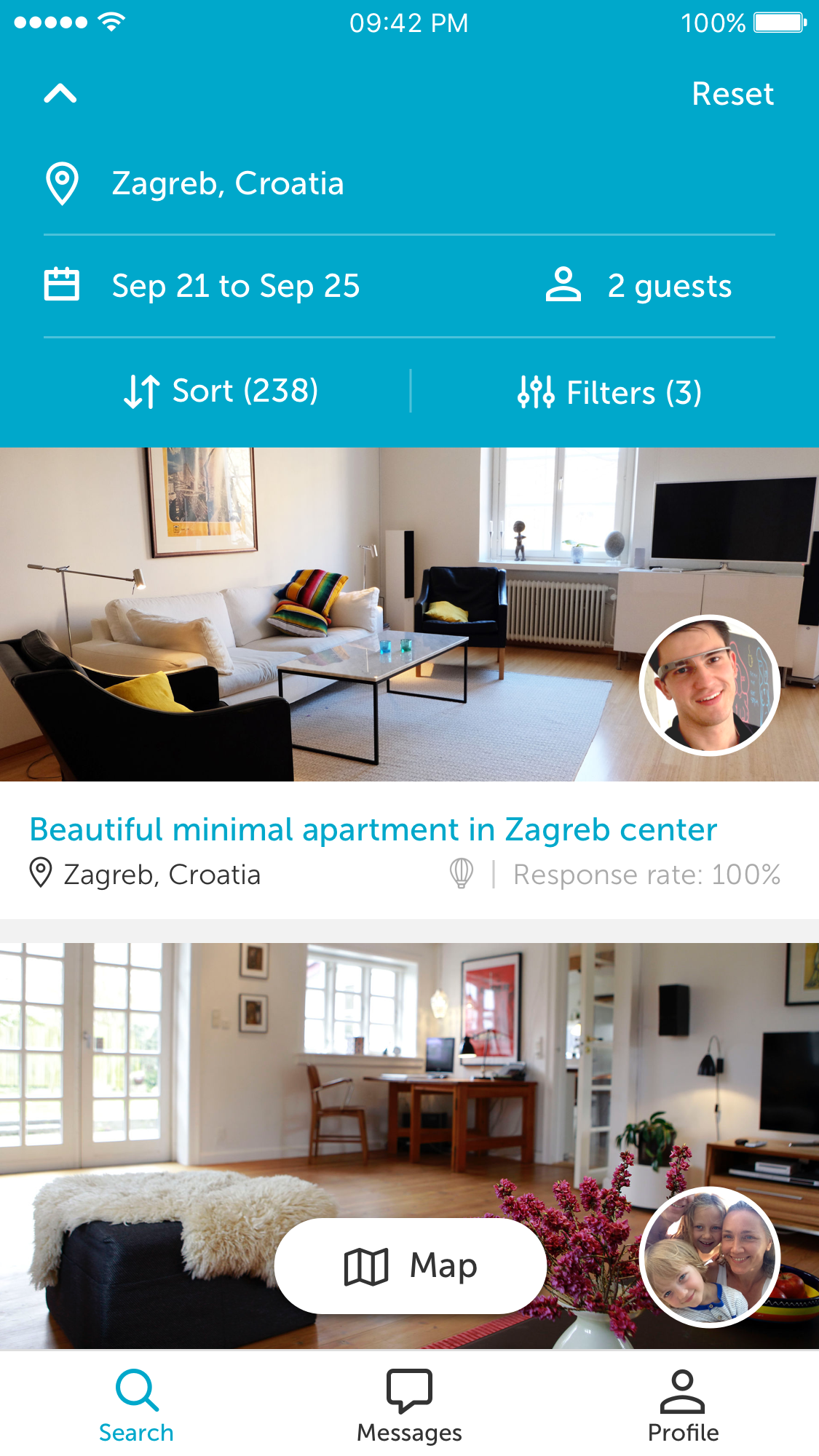 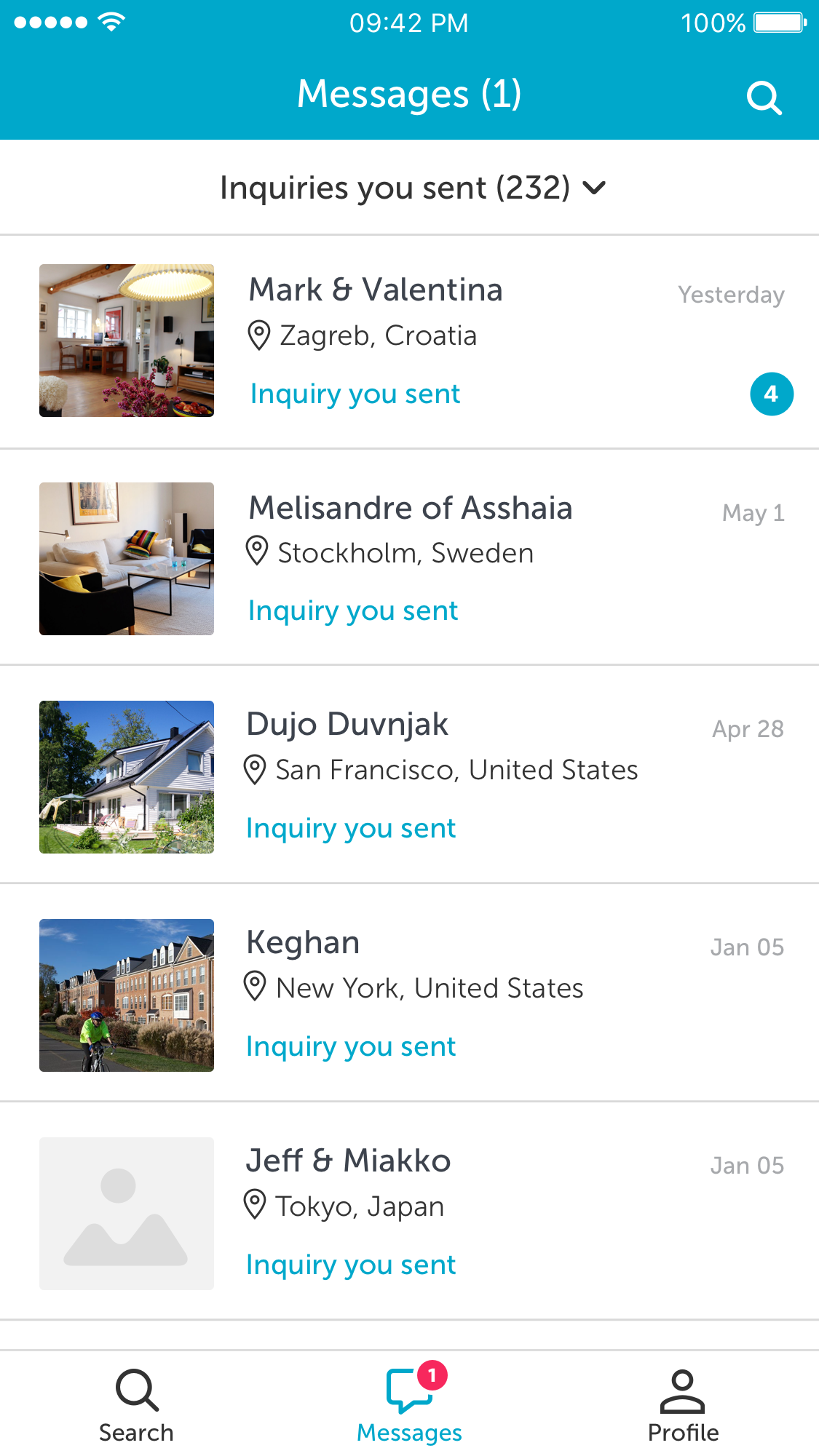 Tools we used during the process:

This project was really intense as I had a double role of UX Designer and a PO. I learned a lot working with developers hand by hand, went out of my comfort zone, dealt with strange iTunes requests and cross-team coordination, among other things.

Some things I learned: